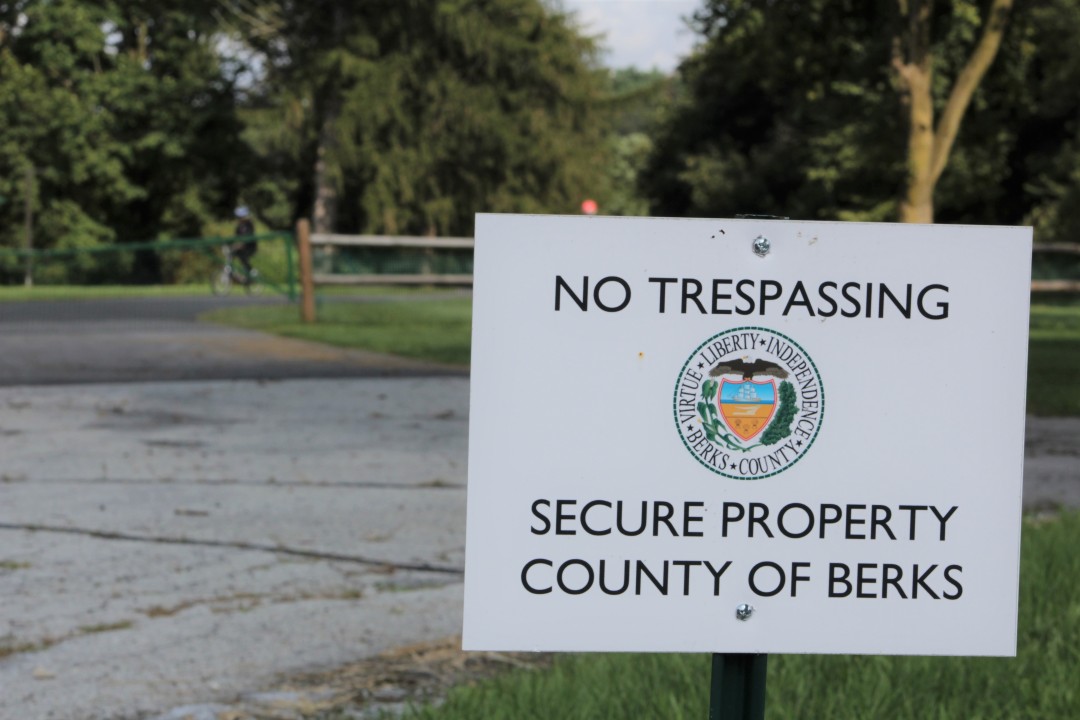 In order to expand upon the information we had gleaned from a variety of news reports  on the facility, two staff members and two advisors of the Writing Wrongs team visited Berks County Residential Center on the second day of our program. Having failed in several attempts to be permitted entry into the facility, we were resigned to observing and taking pictures from the street.

The center is located across from a nursing and rehabilitation facility in Leesport, Pennsylvania. Relatively small, four stories high, and  constructed of red brick with a small parking lot and a waving American flag out front, the building could easily be confused for an elementary school. A large recreation area rolling off the center’s right side — complete with a sweeping green lawn, basketball court, playground, and soccer field — further lends to its overall innocent appearance. All that separates this play-yard from the roads is a small wooden fence lined with green mesh.

Similarly innocuous was the name posted on the roadside sign in front of the  facility. It reads, “Berks County Residential Center” with the words “Immigration Family Center” in smaller lettering underneath. A passerby without prior knowledge could venture any sort of guess as to the purpose of this building. All one gathers from the name is that immigrant families reside here — but for what reason and under whose direction? This ambiguous naming speaks volumes to the facility’s highly contested ethical standing. With the word “detention” not present anywhere on its marquee sign, the facility’s title in no way discloses its express intention as a place where people are held indefinitely, possibly against their will.

During our visit, several of the detainees entered the yard for a recess period. A mother reclined in a lawn chair under a tree. Two older boys sat together in the sun on a grassy hillside, while another pushed a toddler in a small plastic car. A trio of helmeted boys began riding bicycles along a paved driveway that winds towards the fence along the  front of the yard. The wooden fence breaks at the point where this paved drive hits the perimeter; only the green mesh stretches across to form a barrier between the yard and the continuance of the drive, which stretches out to meet the main road. Each time the boys reached the mesh barrier on their bikes, they would revolve slowly back around  and head in the opposite direction along the short drive. For the duration of our stay, these bike riders continued their short circuit along the drive, towards the fence, and back around. The range of their ride is severely limited, just as their lives are  circumscribed by complex bureaucracy and circumstances beyond their control. Witnessing recess at the Berks facility offers the important reminder that efforts to make immigrant detention tolerable can only go so far. You can hand a detained child a helmet and bicycle, or give a detained mother a chair to sit in the under the sun, but still they are not free.

A prevalent argument against the use of family detention addresses the  intangible consequences of detainment, the psychological damage done to those being held indefinitely. Writing for the website thinkimmigration.org, Bridget Cambria, a lawyer for past and present detainees, reports on the traumas that the facility may inflict on its residents. “Even after release,” Cambria details, “many children cannot sleep through the night without nightmares of Berks, without the constant fear of being sent back to detention.” To be held against one’s will is always and inevitably a dehumanizing process, one that robs individuals of their agency. For persons fleeing violence and persecution, time spent in detention may create a painful continuation of any  degradation that they experienced in their home countries.

“You can hand a detained child a helmet and bicycle, or give a detained mother a chair to sit in under the sun, but still they are not free.”

Visiting the Berks facility was both a powerful and disappointing experience for the Writing Wrongs Staff. We were severely limited in our ability to interact with the people we encountered there. We wondered and worried about how our presence made them feel, what they thought about the mysterious people taking notes and pictures on the sidewalk. Our photographer and videographer waved to the young boys resting on the hillside, and they offered a friendly wave back. Only a small, wooden fence separated us from the individuals at rest and play in the recreation yard. We felt so close to being able to learn and share their stories.

One of our major hopes for the project was to be able to  speak with people being held in the family detention, so that we could honor their resilience and reveal the truth of their experience to the public. Unfortunately, this was impossible. As several guards entered the yard and then exited the facility to meet us on the street, we decided it was time to go. We left feeling confused and constrained, wishing that we could do more.

This story is published in “Untold, Unseen, Unheard: Perspectives on Immigration.”